On 23 December 2016, a US President made a decision to do something so daring that it shocked the world:

President Barack Obama ordered United States’ UN Ambassador, Samantha Power, to abstain a US vote regarding UN Security Council Resolution 2334. This mostly symbolic resolution demanded that Israel ‘immediately and completely cease all settlement activities in the occupied Palestinian territory, including East Jerusalem’ and said the establishment of settlements by Israel has ‘no legal validity and constitutes a flagrant violation under international law’.

President-elect trump did all that he could in the background to defame Obama and sabotage the entire process leading up to this vote as insiders had gotten wind of the president’s decision. In the end, the resolution passed with 14 ‘yea’ votes, and the one abstention being the US. FFP discussed the controversy at the time – the post can be read here. It ended with this comment:

The UN Security Council’s resolution will be remembered in history as a good day for the international community – Donald Trump’s role will be remembered as a disrespectful act which sought to undermine a sitting president’s attempt at ‘making America great again’ in the eyes of the world who look to the United States as a beacon of hope for peace and justice.

Fast forward to March 2017 –  trump’s UN ambassador, Nikki Haley, while groveling before her masters at the AIPAC (American Israel Public Affairs Committee) Annual Policy Conference in Washington, D.C., had this to say about Obama’s principled stance:

When Resolution 2334 happened, and the US abstained, the entire country felt a kick in the gut. We had just done something that showed the United States at its weakest point ever.

Of course ‘the entire country’ Haley spoke of could only have been Israel – in the US, those familiar with the situation actually supported Obama’s decision. And, to the contrary, this was an incredible moment when a US president actually showed great strength when it comes to standing up for the principles of peace and justice that the US claims to uphold.

This is noted in relation to the following entry from Mondoweiss because it is another instance where Obama chose principle over Israeli commands. People will have differing opinions about Obama’s overall performance as president, but one thing history should always remember is that this was one of two instances when a US president had the nerve to look after American interests – and the interests of many others – over the damaging and potentially catastrophic interests of the criminal enterprise that is Israel. The other being John F. Kennedy’s stance on Israel’s nuclear weapons program – and we all know the tragic end of that courageous President’s life. Just imagine, this from a US president:

Under similar pressure three years ago, Obama said that only one country in the world was against the deal, Israel, and that it would be an “abrogation of my constitutional duty” to defer to Israel rather than the American people.

Quite different from the agents of Israel roaming around the oval office today.

Netanyahu’s cheap theatrics fall flat, but alas, he has an audience of one — Trump

The good news from Benjamin Netanyahu’s speech on Iran’s “secret atomic archive” yesterday is that it was so cheaply theatrical that it is being widely dismissed as vaudeville. He used the word secret 15 times, and in the encore pulled back a black curtain on his evidence, proclaiming, “I just revealed something the world has never seen before.”

The bad news is that the world doesn’t matter; Netanyahu obviously pitched his message to one person, Donald Trump, who is moved by cheap theatrics; and lobbying Trump to go to war against Iran looks to be a far better bet than lobbying his predecessor, Barack Obama. Under similar pressure three years ago, Obama said that only one country in the world was against the deal, Israel and that it would be an “abrogation of my constitutional duty” to defer to Israel rather than the American people.

The overnights on the speech were almost all negative. Reuters:

Intelligence experts and diplomats said he did not seem to have presented a “smoking gun” showing that Iran had violated the agreement, although he may have helped make a case on behalf of hawks in the U.S. administration who want to scrap it.

Most of the purported evidence Netanyahu unveiled dated to the period before the 2015 accord was signed, although he said Iran had also kept important files on nuclear technology since then, and continued adding to its “nuclear weapons knowledge”.

For those who have followed the Iranian nuclear file, there is nothing new in Bibi’s presentation. All it does is vindicate need for the nuclear deal But the Israeli prime minister has an audience of one: Trump And he’s unfortunately unlikely to reach the same conclusion.

Can anyone remember the last time a Head of Government announced a major emergency address to his nation, then spoke in a foreign language using graphics incomprehensible to his own citizens?

Prime Minister Netanyahu is doing an amazing job making the case for an international agreement to provide unprecedented monitoring and inspections of Iran’s nuclear program to ensure it cannot produce nuclear weapons.

The concern is that Netanyahu is whispering in Trump’s ear for a war on Iran in Syria– even as Israel has struck Syria again, killing 26 people, and is preparing to carry out another massacre on Israel’s border with Gaza. “The bogus pretext for war: Iran lied about their nuclear program before the nuclear deal, therefore the nuclear deal should be scrapped, even though inspections are ultra-invasive and foolproof,” writes one anonymous foreign policy observer.

J Street tweeted out Netanyahu’s last successful push for an American war, the invasion of Iraq. Netanyahu told Congress in 2002:

If you take out Saddam’s regime, I guarantee you that it will have enormous positive reverberations on the region…. I think people sitting right next door in Iran will say the time of such regimes, such despots is over…

This time Netanyahu is missing some of his neoconservative consort.  One soldier who’s absent this time, Jeffrey Goldberg; the Atlantic calls the Netanyahu presentation“strange” and says it’s all based on old conduct. Another unimpressed warhorse, Richard Haass of CFR, is retweeted by Obama’s former ambassador Daniel Shapiro:

Nothing stated by Israel PM or WH contradicts that Iran in compliance w JCPOA and best US policy is to live with it, counter Iranian push for regional primacy

Unfortunately the New York Times is parroting Netanyahu. It publishes a wheedling page 1 article by David Halbfinger, David Sanger, and Israeli hawk Ronen Bergman in which you have to wait until paragraph 17 to discover it’s all about the past, nothing new at all, on a par with Netanyahu’s cartoon bomb diagram at the UN. Lest you forget:

The foreign minister of Iran reminds us of that stunt:

BREAKING: The boy who can’t stop crying wolf is at it again. Undeterred by cartoon fiasco at UNGA. You can only fool some of the people so many times.

Today Netanyahu has released more of the magic act, this one where he pulls black curtains on loose leaf binders and CDs. 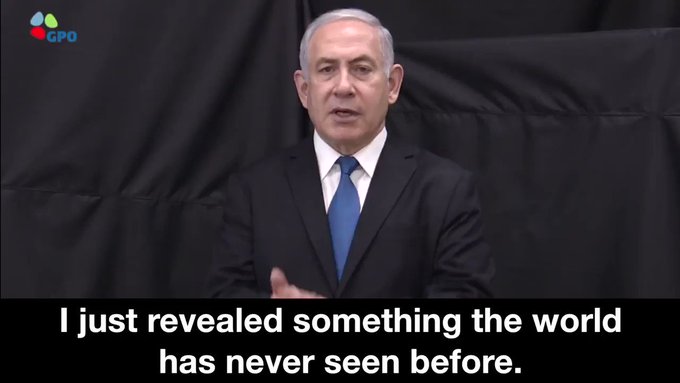 I just revealed something the world has never seen before.

“Iran lied through its teeth,” he says in that performance, two days after telling Mike Pompeo,  “Iran is trying to gobble up one country after the other.”

Few are pointing out what should be noted: Netanyahu is under investigation at home for corruption, with many expecting indictments. “Any report on Netanyahu’s speech about Iran must explain that many, in Israel and elsewhere, believe he is distracting from the multiple corruption probes that are targeting him and his wife, Sara,” writes James North. The NY Times article doesn’t mention Netanyahu’s fears of investigation(s) until the 33rd paragraph, right near the end. The Washington Post never mentions it.

It’s springtime for neocons. The Foundation for the Defense of Democracies is pushing the Netanyahu line.

Simple takeaway from Netanyahu presentation: Iran regime conducted nuclear weaponization activities, lied to the IAEA and to the world & hid 100,000+ documents, videos, photos with the instructions to restart a nuke weapons program at a time of its choosing.

FDD cites Netanyahu’s former national security adviser, who is a visiting fellow at the Foundation, Jacob Nagel. Sort of like Ronen Bergman the promoter of the Mossad working for the New York Times. This pinball machine never Tilts.

Thanks to Scott Roth.

One thought on “The World’s Not Buying It:”