Humanity can no longer count on Government. No matter which slant you wish to put on it, your Government is corrupt and has been corrupt for years! It is not about to change by electing a new “Zionist Puppet”. Whether or not that is all you have to choose from.

They are the 1% and when I say that, realize that we are the 99%. That means that there are WAY MORE of us than them! They merely control as YOU LET THEM! They do change their minds. They did it with:

And while they come up “short” on many of these aspects, they did it because YOU demanded it. YOU have all the Power! THEY like to pretend that they do, but they don’t unless YOU listen to them!

Robotics is not NEW. It was merely suppressed from when Nikola Tesla first demonstrated it before 1900. He must have been pulling his hair out in 1940 as he watched people getting up to change the channel on their “New Fangled TV Set”, and when he said (just after 1900) that one day, people would own a “hand held device” which would allow them to talk to people around the World and send photo’s and video, they scoffed at him. This is what you were “trained” to do by these Elite. Like “Circus Monkeys”! Yet today, you look at it as a threat? They did too back then.

They (the hoodwinked masses) thought that Tesla must be a Warlock! How could this “remote controlled boat” operate without wires? It must be the work of the Devil!

When he was able to show that he could power the “Entire Eastern Seaboard” from Niagara Falls, without Pollution, or destruction of Nature, people just accepted it on one hand, while watching that “New Fangled TV” and their Favourite Zionist Made Show of “Superman”, where Superman had to take out that Evil Genius “Tesla” and his “Death Ray”. This is the Zionist Propaganda that they swallowed.

Teaching Edison in Zionist Controlled Schools, the “Electrical Engineers” came out of College and University not even knowing the name “Nikola Tesla”. The Father of Wireless.

Ohh yes, they too could hide his name in Zionist Run Media about:

And never mentioned who was behind it. Mr. Nikola Tesla.

His biggest contribution he was stopped at giving. Free Energy. He could get it from the Ionosphere. Cleanly. Without damage to any of the Environment, and Wirelessly. He could give it to everyone. Yet he was stopped.

Yet TWO patents of his, they never stopped. The Solar Array and the “Bladeless Wind Turbine”, which you should know about today.

Is it too late to save the Planet? It took over 50 years to get Remote Control into the homes of everyone. How long does it need to take to get the REST of Tesla’s Discoveries into common place for the benefit of Mankind? 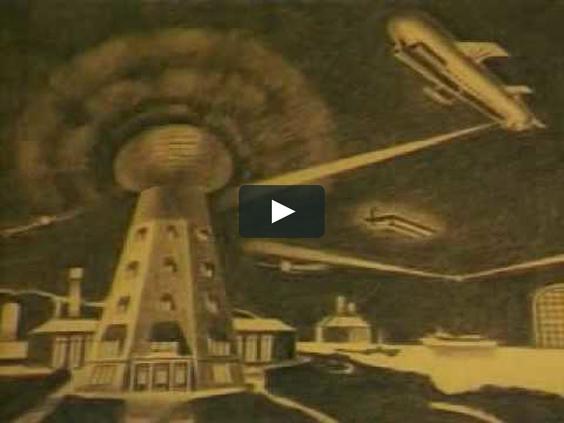 We took the wrong step Years Ago! on Vimeo

We are learning and changing the World @ https://www.facebook.com/groups/teslarelease/

With that, I got a comment from one of the “Hoodwinked Masses”

Commenter: So basically you’re saying anyone that supports Israel as a self-governing country is a major shit?

Well, first of all, it is a State (to be specific) and not a Country. Supporting Israel is another “hoodwinked road” to go down, starting with the Balfour Declaration. The only way you could really support it is if you are IGNORANT of the Balfour Declaration, and who Zionists really are, where they came from, and their goals.

However, in this instance, it is control of North America (which is the focus) and certainly that of the USA. Nikola Tesla was shut down by JP Morgan. JP Morgan was nothing less than a Lieutenant of the House of Rothschild. He even formed an identical type name for himself, calling it the “House of Morgan”.

The Rothschild influence in the USA is easily researched. It goes back to the time of Tesla, the formation of:

And finally proving their influence with the Balfour Declaration, before WWI ended (reversing the outcome of WWI with USA help), then using their influence to start WWII, get the USA into it, and then getting the “Official Status” as a State in 1948. Since then, they have been working on the Greater Israel Project, using their “Goyim” the USA to get the job done. Yet you are still ignorant of the Balfour Declaration obviously, and that is where they Illegally stole the land in the first place. So here:

Have YOU faced this?  Don’t worry, you will never help the “hoodwinked masses who combat you”

This coming from a Group called “Homemade Solar Power Systems”

ONLY THE ONES WHO READ THEIR LOST COMMENTS!

2 thoughts on “How deep does Zionism Go?”